“We wouldn’t have been able to do it without Swim Across America funds.” Seattle Cancer Care Alliance physician and researcher, Dr. Venu Pillarisetty, takes us behind the scenes to understand exactly how SAA-Seattle funds make a difference. 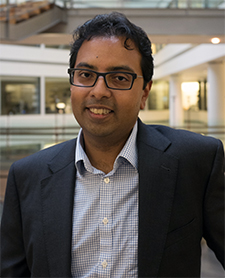 Dr. Venu Pillarisetty is a surgical oncologist who not only cares for Seattle Cancer Care Alliance patients but also dedicates his time to researching improved treatments for pancreatic cancer and other aggressive types of cancer. “My goal is to not have to operate,” he says, and “find something that’s lasting.” So when he began his research in 2009, SAA-Seattle was fundamental to his progress.

Dr. Pillarisetty’s initial work involved studying immune cells in human pancreatic cancer. As an early-stage researcher, he had limited startup funds provided by SCCA partners, University of Washington and Fred Hutchinson Cancer Research Center. That’s why Dr. Pillarisetty was especially grateful to receive $40,000 from SAA-Seattle, which helped to fund the salary for his laboratory technician, Kendall Shibuya. Thanks to SAA-Seattle’s support, they worked together for three years conducting successful research. Ultimately, the work was published (http://dx.doi.org/10.1371/journal.pone.0096565) and Kendall was admitted to medical school.

Early SAA funding truly jumpstarted Dr. Pillarisetty’s career, granting him the opportunity to do studies outside of his pancreatic specialty (Sarcoma, Colorectal, and Head & Neck cancers). “Being able to look at different tumor types helps you understand each one better,” he explains.

Because of his early work, Dr. Pillarisetty now has about $1 million in funding. This would not have been possible, he explains, without the help from SAA-Seattle. “To get a federally funded grant, you need to have done about half of the work that you proposed,” he says. This proposed work is impossible to complete without funding. So, SAA-Seattle intercepted a vicious cycle, making it possible for Dr. Pillarisetty to be awarded more funding and continue conducting groundbreaking research.

Scientists have countless good ideas; however, only a small portion of them (think less than 10%) lead to meaningful discoveries. Thanks to SAA-Seattle, one good idea was transformed into successful experimentation.

“It was absolutely essential to my research,” says Dr. Pillarisetty of SAA-Seattle’s support. “For a clinician scientist to be able to do cutting-edge, high-risk research there is no way to do it without outside funding.”

Posted on January 30, 2017 Posted in Uncategorized