Making Waves with Hope is a series of inspiring messages by leaders in the Swim Across America community. Olympians Rowdy Gaines and Craig Beardsley had earned their spots on the 1980 USA Olympic Team when uncertainty struck. The US boycotted the 1980 Olympics and in an instant, the dreams of both—and hundreds of others—were washed away. Fast forward three decades to the postponement of the 2020 Olympics. Rowdy and Craig offer their wisdom to dealing with uncertain moments. Rowdy and Craig were guests on “Pitch The Rhino” podcast. Give it a listen here: bit.ly/PTRPodcastCR.

Craig Beardsley on Recovering From What You Can’t Control:

“One of the things that I learned from what happened in 1980, and this is a life lesson for me, was that I did everything I was supposed to do getting ready for ‘80, and then things changed. And I learned that sometimes you can do everything you’re supposed to do but sometimes things are just out of your control. That happens in life. And when that happens you have to just learn how to recover from that and move forward.”

“The most important thing is our health and wellbeing. So, these decisions that came down were the right decisions, it doesn’t make it any easier. It’s just like in 1980, at the time I felt like, ‘Okay I’m going to support my country’ and it felt like the boycott was the best way to answer the Russians that had invaded Afghanistan, but I didn’t like it. It still was devastating. It still hurt me. And I think that it’s okay to be vulnerable right now. I think it’s okay for these athletes to feel anger, the emotions of going through denial first, and then anger, and then sadness and depression, and then acceptance. And sooner or later you’re going to have that acceptance and be able to move on. And it will make you stronger, it will, I guarantee you at the very best it will make them stronger, because in the end, after acceptance for me, was motivation.”

Craig Beardsley on Being Your Best and Obstacles:

“When they announced the boycott, I wasn’t the world record holder at the time, I still had something to prove to myself more than anybody else that I could be the best. So I didn’t allow that to derail me as much as maybe some of the other people. I just felt compelled that I still had to prove something, to everybody and myself that I could be the best, and that I trained for that, and I wasn’t going to let anything get in my way of being the best at this point.”

“Something that I learned directly from experience is if you’re training and all you’re doing is training, try to have something else in your life that you can focus on. And not just fun stuff, but something that you actually have to focus on that you can remove yourself from the sport because it will help you and it will give you room to breathe, and you’ll look at the sport with fresh eyes instead of getting burned out by it.” 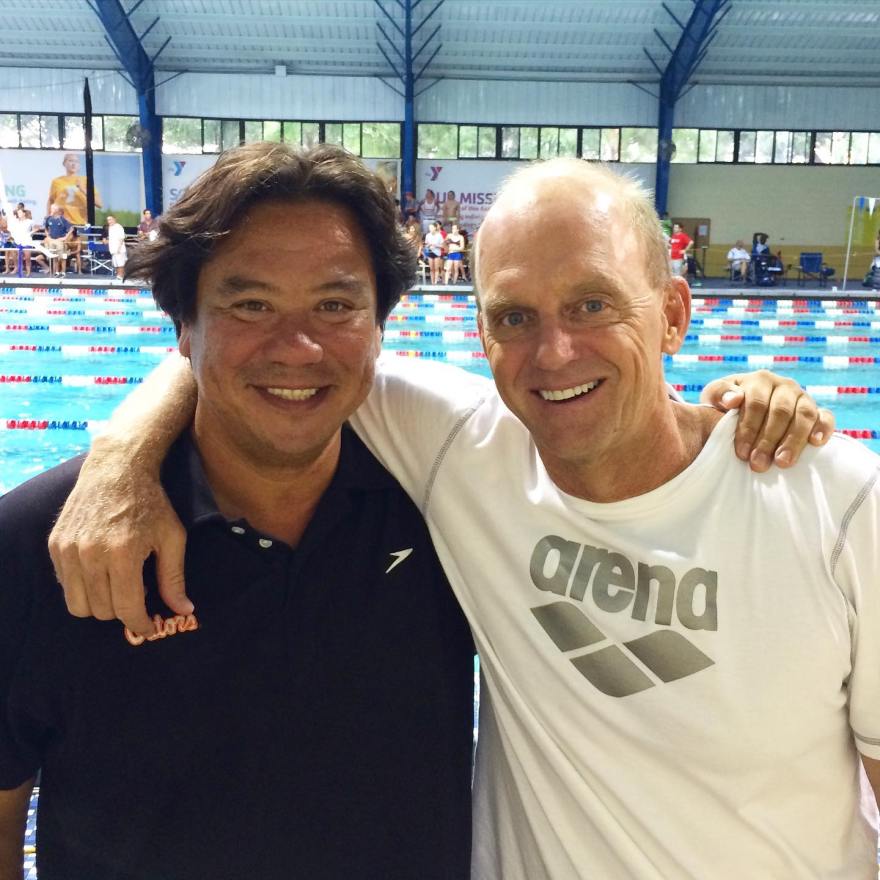 Craig Beardsley was heavily favored to win the 200m butterfly as a member of the 1980 Olympic Team, only to be forced from competition when politics intervened, and the US boycotted Moscow’s Summer Games. Between 1980 and 1983, Craig held both the World and the American Records in the 200m butterfly, and he won Gold at the Pan American Games in both 1979 and 1983. A nine-time US National Champion, Craig captured another Gold in the same event at the NCAA Championships while an All-American at the University of Florida. Beardsley is currently the Swim Across America Director of Partnerships.

“Rowdy” Gaines  held 11 World Records during a four-year span in the 1980s. At the age of 25, Gaines won three Gold Medals in the 1984 Games in L.A., including the 100m free in which he set a new Olympic Record, .45 seconds shy of his own World Record. Rowdy also swam on the Gold-Medal winning 400m free and 400m medley relays, both which set World Records. In 1984, he was named World Swimmer of the Year. During his education at Auburn, Rowdy was a five-time NCAA All-American and honored as the Southeastern Conference Athlete of the Year. In 1996, Gaines became NBC’s Olympic Games Swimming Commentator, filling that role in all Olympics and major competitions since. Gaines has also been an Olympic Ambassador from Swim Across America since our organization’s inaugural swim in 1987.