Picture a sunny and warm mid-August morning in Colorado. Retired Olympians such as Missy Franklin and George DiCarlo are smiling with water enthusiasts of all ages and abilities. They enter the water of Chatfield Reservoir in Littleton to “Make Waves to Fight Cancer” with the Swim Across America-Denver charity swim. There’s a sense of community as supporters and family cheer for them. Not because they’ll be racing for first place, rather because they’re all there to raise money that will provide grants for pediatric cancer at Children’s Hospital Colorado.

“With [Swim Across America grants] we’re building the largest national database on pediatric myelodysplastic syndrome (MDS) to collect data on all of the past and future children with this life-threatening disorder. SAA’s contribution will help encourage research collaboration at over 50 children’s hospitals to enter data that will help develop a national standards-of-practice to treat pediatric MDS,” said Taizo Nakano, MD.

Grants from SAA will also be used to fund site initiation of a nationwide clinical trial for pediatric MDS at Children’s Colorado and will also be critical for Dr. Forester and Dr. Winters as they investigate the biological activity of the drug combination being tested.

“This will allow us to understand why the drugs work for pediatric MDS and perhaps enable us to predict at diagnosis which children with MDS are more or less likely to benefit from these drugs,” said Amanda Winters, MD.

“We welcome and invite our Colorado community to join us,” said Nicole Vanderpoel and Jessica Vitcenda, community leaders for SAA—Denver. “You can swim, volunteer or do a virtual activity with all the proceeds staying in Denver to benefit Children’s Colorado.”

Learn more about SAA-Denver and how you can get involved by visiting Swim Across America – Denver.

What is a QCD?

A qualified charitable distribution (QCD) is a distribution of funds from your IRA (excluding an ongoing SEP or SIMPLE IRA) directly to a qualified charitable organization, such as Swim Across America. Since the gift goes directly to the qualified charity without passing through your hands, the dollar amount of the donation may be excluded from your taxable income up to a maximum of $100,000 annually, with some exceptions. Please consult your tax advisor for information regarding your specific exceptions.

Am I eligible to make a QCD?

If you are 70.5 years or older, you can make tax-free gifts to Swim Across America of up to $100,000 from your IRA. Your donation will count toward your minimum required distribution.

How do I make a QCD to Swim Across America?

Contact your IRA custodian and request a direct transfer to:

Do not withdraw the funds and make a contribution yourself, or you will have to report the withdrawal as taxable income. If you are requesting the transfer at the end of the tax year, allow enough time for the transfer to complete by December 31.

Please note: we are not in a position to give formal tax advice, and we strongly advise you to have these gifts reviewed by your own qualified financial or tax advisors.

On September 25th, three-time Olympian and 2016 Team USA Captain Elizabeth Beisel made history as the first woman to swim the 10.4 miles from mainland Rhode Island to Block Island. She undertook this open-water challenge as a fundraiser for Swim Across America (SAA) to benefit cancer research and patient programs in honor of her father, Charles “Ted” Lyons Beisel, who passed away from pancreatic cancer in July. To date this charity swim has raised over $163,000.

Thanks to photographer Cate Brown, we have some great images to share from that historic day below.

Swim Across America is proud to share that MUSC Hollings Cancer Center researcher Haizhen (Jen) Wang, Ph.D., has been awarded a five-year $344,000 per year grant by the National Cancer Institute (NCI) to pursue her early investigator studies in leukemia. Prior to receiving NCI funding, Dr. Wang’s research was supported by $65,000 in grants from the Swim Across America – Charleston-Kiawah charity swim held annually at Kiawah Island Golf Resort.

Swim Across America helps fill the funding void by providing grants so doctors can conduct clinical trials and research that can lead to breakthroughs in detection and treatment. When this funding leads to larger grants like Dr. Wang’s with the NCI, it’s a win not only for future patients but for all Swim Across America participants, donors and beneficiary partners.

According to the Hollings website, Dr. Wang’s research “focuses on uncovering the connection between cancer metabolism and cancer immunology. Her research has shown that a molecule called cyclin-dependent kinase 6 (CDK6) may be a key regulatory molecule in cancers such as leukemia.” The grant funding has already started this year and allows Dr. Wang to add research team members. The grant also has the unique option to extend two more years.

SAA-Charleston-Kiawah has supported MUSC Hollings Cancer Center since 2019 and has welcomed Dr. Wang, her family and other members of the Hollings team to participate in our annual charity swim.

To learn more about the impact or donate, please visit swimacrossamerica.org/kiawah

CHARLOTTE, July 1, 2021 — Every 15 minutes, 50 Americans are diagnosed with cancer. That’s close to 1.9 million new cases of cancer diagnosed just this year with an estimated 600,000 cancer deaths. But those statistics don’t tell the whole story. Within someone’s cancer journey, there are remarkable stories. Stories of triumph, stories of courage, stories of pioneers and stories of heartbreak that inspire.

WaveMakers is a new docu-series about Swim Across America, produced by Browning Production & Entertainment, and airing on the Discovery Life Network beginning July 8 at 8:00 p.m. (EST). It is a six-episode series that shares the stories of patients, survivors, family members, oncologists, swimmers, volunteers and Olympians who are all striving to make waves in the fight against cancer.

“WaveMakers showcases the Swim Across America community that is changing the face of cancer,” noted Rob Butcher, CEO of Swim Across America. “Our grants have led to breakthrough treatments such as immunotherapy that are saving lives. WaveMakers is a beautiful showcase of stories, and how the disease changes lives. We hope that viewers will be inspired and in watching WaveMakers know that there is hope.”

“I wrote ‘I’ll Take You Home’ to honor our family friend Grace Bunke, who sadly lost her life to osteosarcoma, and inspire her mother Vicki who is carrying on Grace’s legacy through Swim Across America to help others,” said John Driskell Hopkins. “I’m honored to be part of the story that brings a message of hope to so many.”

WaveMakers six-part docu-series will air for six weeks on Discovery Life Network. The first episode will air July 8 at 8 p.m., (EST). The trailer and broadcast schedule with show titles are available at wavemakers.tv.

Episode 3: July 22; Olympians and survivors inspiring each other

Episode 5: August 5; When will cancer finally be cured?

Episode 6: August 12; A family overcomes heartbreak to find purpose with Swim Across America

Douglas Whitlock, Swim Across America – St. Louis participant and partner at Sandberg Phoenix, one of SAA-St. Louis’s official sponsors, took his SAA -Coast to Coast Challenge to whole new level by bicycling from Grant Park in Chicago all the way to The Gateway Arch in St. Louis – a bike ride that is over 300 miles! Not only did he complete the journey, he and his team raised over $13,000 for groundbreaking cancer research and clinical trials at Siteman Cancer Center along the way! Congratulations to Doug for finishing such a challenging journey and for inspiring us all. 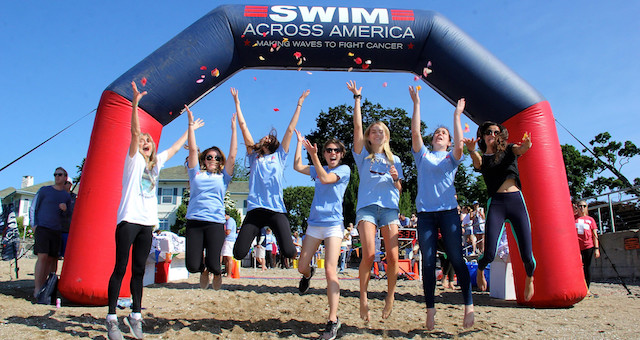 In 1987, an inaugural charity swim was hosted across Long Island Sound that raised $5,000 for cancer research. Since then, Swim Across America charity swims have granted nearly $100M that has funded innovative cancer research and clinical trials. Swim Across America grants have played a major role in the development of immunotherapy, detection, gene therapy and personalized medicine. The impact is that families who hear “you have cancer” are more than ever hearing “there is hope.”

In addition to these grants that are being funded by Swim Across America charity swims within their community, Swim Across America is awarding $120,000 in grants to the Conquer Cancer Foundation (American Society of Clinical Oncology—ASCO) and the American Association for Cancer Research (AACR) that will fund young investigators who have promising ideas to fight cancer. 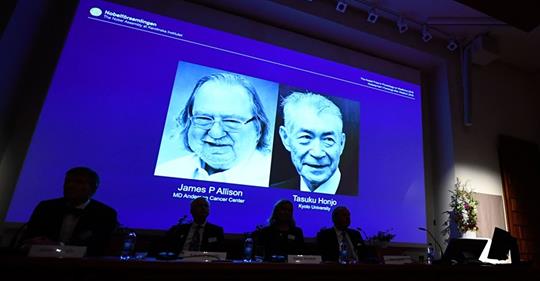 The 2018 Nobel Prize in Medicine has been awarded to Dr. Jim Allison and Dr. Tasuku Honjo for their work in immunotherapy.  Swim Across America grants have played a role in the development of their research.

Dr. Jim Allison has been awarded the Nobel Prize in Medicine for his breakthrough research that our immune system can fight cancer. The Swim Across America research lab at Memorial Sloan Kettering Cancer Center collaborated with Dr. Allison to focus its research and clinical trials to understand how immunotherapy treatments could be developed for patients. The research and our grant funding at Memorial Sloan is more important than ever to understand why some patients respond to immunotherapy and others

Dr. Tasuku Honjo was awarded the 2018 Nobel Prize in Medicine. His discovery helped pioneer a new type of cancer treatment called immunotherapy. With Dr. Honjo’s discovery, SAA beneficiary Sidney Kimmel Comprehensive Cancer Center at Johns Hopkins was able to conduct a clinical trial funded by Swim Across America that helped lead to the FDA approval of Keytruda. Families are being given hope because of pioneering research and non-profits like Swim Across America that provide grant funding.

You can read more about the 2018 prize here.

Swim Across America is excited to announce  its 2018 open water schedule. After a record-setting 2017 that saw $4.8 million granted to cancer research, SAA will be expanding to 18 full-scale open water charity swims. Denver and Richmond join the fold as new swims and Charleston-Kiawah will expand from its original clinic/short-distance concept. Check out the schedule below, register and help SAA #makewaves to fight cancer in 2018! Direct link is here. 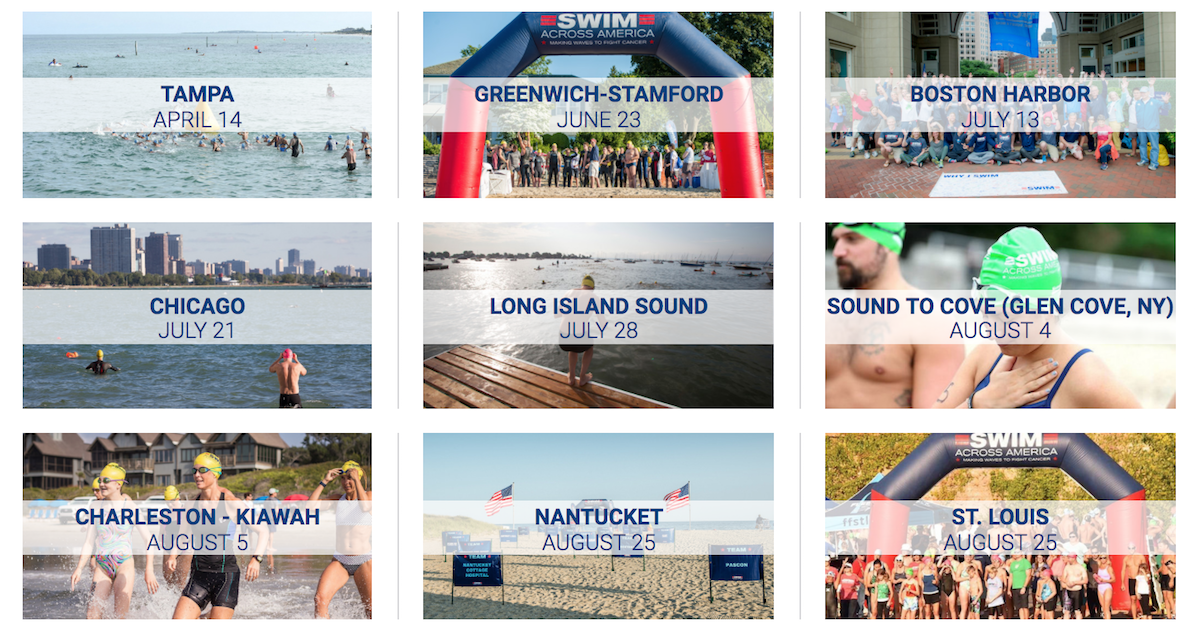 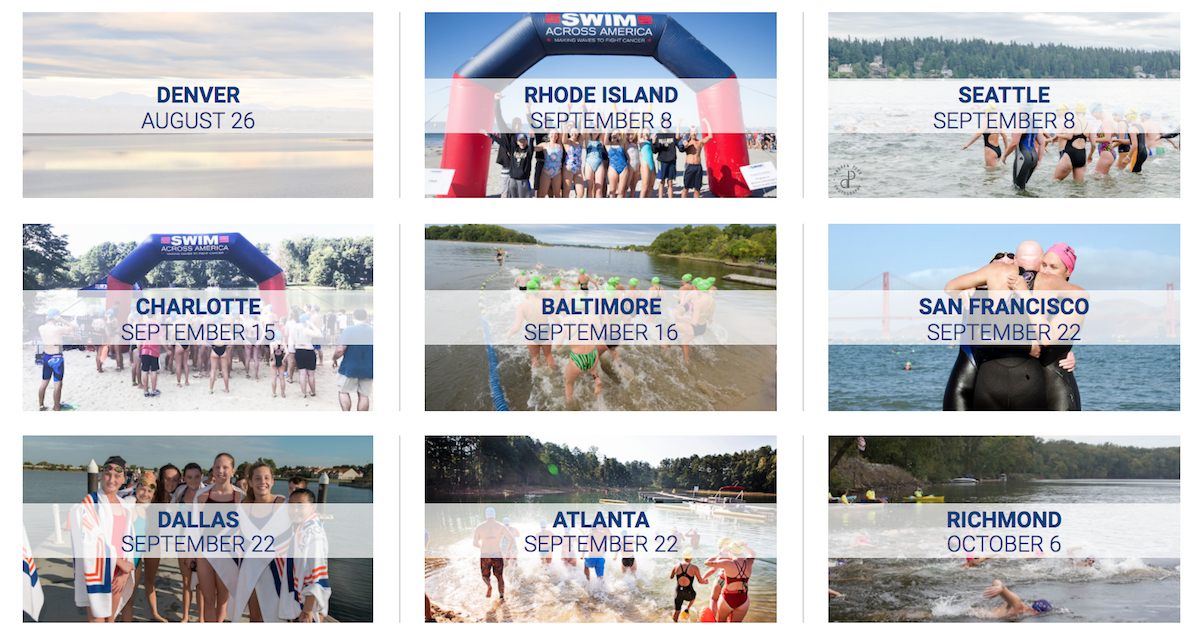 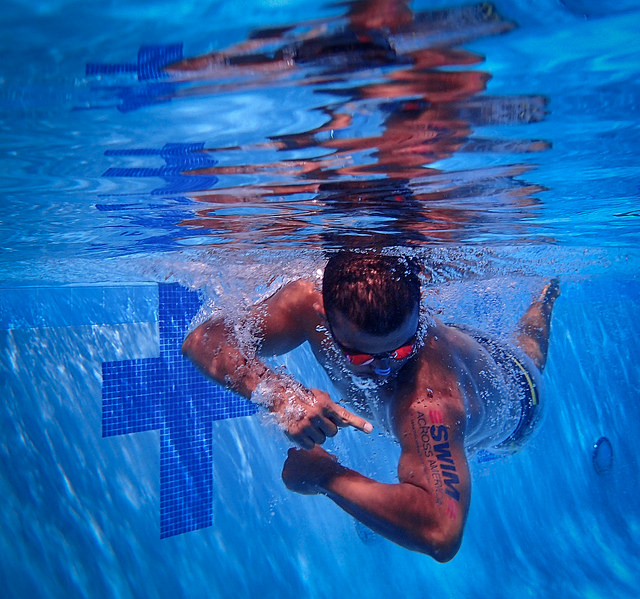 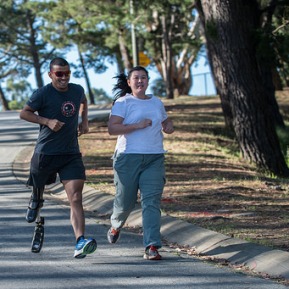 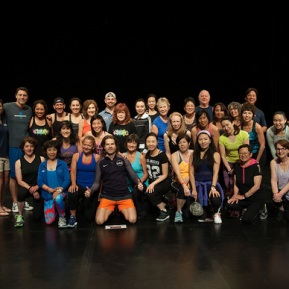 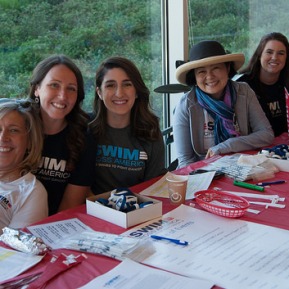 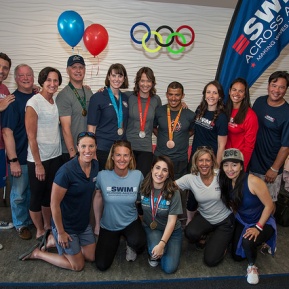 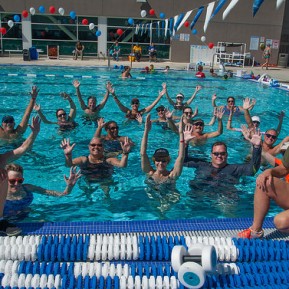 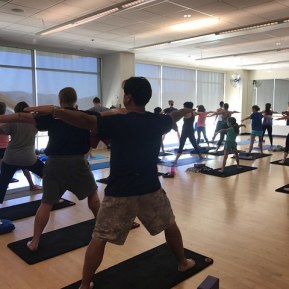